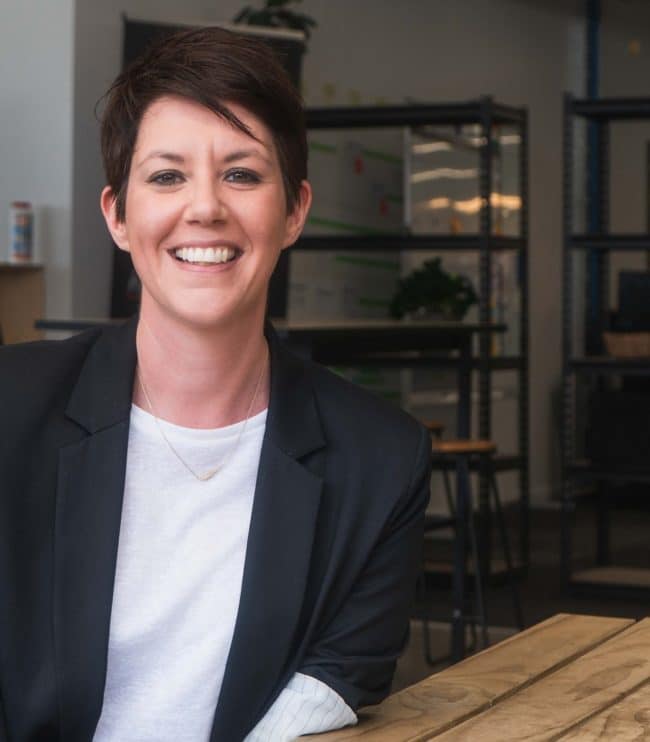 For Salt’s latest Women in Tech interview, we caught up with Angela Bird, Operations Director at RUSH, to talk diversity and advice on creating an inclusive workplace.

The #SaltSessions Women in Tech #WiT interview series speaks with thought leaders from around the world to get their opinion and advice on how they have grown their career in tech, and overcome challenges and adversity during their career.

I am currently the Operations Director at RUSH, a design technology company. The constantly changing landscape of the work we do, the clients we work with and how that impacts the scale of the business, and the types of people we hire is exciting. We’re a company that is growing rapidly but doesn’t compromise on its purpose or values. It’s great to work in an environment that celebrates that whilst being humble about how it achieves it.

What has been your most career defining moment that you are proud of?

Being fired from a job in my early 20s. Unintentionally, I found myself back in the digital world after dabbling in web development at university and the rest is history.

I have witnessed a real change in the variety of ways girls are encouraged into tech, primarily in schools. For example, my daughter will be taking coding classes at school next year and is very excited at what she’ll learn. Admittedly, she has a mum who works in the industry, so she may have more interest than most, but I believe she and her peers see it as a genuine chance to learn something new, without the notion of it being seen as a ‘boys’ subject.

Also, initiatives such as Technovation which equips young women (ages 10-18) to become tech entrepreneurs by working in teams to code mobile apps that address real-world problems are also proactively demystifying the industry.

I am lucky enough to be a mentor next year and I’m really looking forward to seeing how this develops the existing appetite for tech or introduces the teams to tech offerings especially in the diversity of roles or skill sets.

What challenges have you faced in the workplace, especially your experience in male-dominated environments?

It’s not always been challenging. When I started in the industry 18 years ago, I was always one of the few women in a company and was largely comfortable with that.

However, as I have progressed through my career, the reoccurring theme has been the need to justify why I was in the room because barring having a lot of experience, there was that underlying notion that as a female I couldn’t understand much about technology, delivery or operations. The irony is I constantly surprise myself at how much I do know!

Across the board, the reality is we still have a long way to go to even out the gender balance across all industries. However, by raising awareness of why it is both a male and female issue — it impacts the way companies operate, the people they hire and the values they stand by; it’s the only way we’ll achieve parity.

What is the biggest deterrent in your opinion to women succeeding in the workplace?

Lack of age diversity in the workplace which affects both men and women. I recently did a talk about this and the stats are sobering. The average age for someone who works in the tech industry is 28 and those under 29 make up around 50% of the industry with those over 38 making up 8%.

I’ve become progressively aware that I am now older than most of my colleagues, and there are fewer female peers who I can advocate for and vice versa.

However, I can see that changing over the next 10 years when those who are 28 years old become 38, and there’ll be a more balanced peer group due to the hard work we’re now doing in raising awareness on the need for equality.

I have been fortunate enough to have people who have advocated for me, most often friends or peers who have my back than people senior to me.

Two people spring to mind in particular, both males who helped me challenge the impostor voice in my head and still think I’m awesome at what I do! I don’t want to name them, but they know who they are.

As an employer, what would you recommend to other companies regarding infrastructure to have in place to develop the best talent?

Clear lines of progression and development plus an environment that encourages honesty. One of RUSH’s values is to ‘Say it how it is’ and I respect that a lot.

It’s through advocacy. I have always encouraged people to sit outside their comfort zones by giving them projects that they think are well beyond them. My experience is that 9 out of 10 people will always rise to the challenge, and due to increased confidence and skills will be better at their jobs.

The worst: Misrepresentation — I have experienced a business that heralded itself as a ‘diverse’ workplace, yet it was so far from that. Sexism and bigoted views held by some of the leadership team permeated the whole business. Pretending to be one thing and being something else doesn’t sit well with me.

The best: Asking for help — Getting organisations such as Diversity NZ involved in your business. I think they do a great job at identifying what you need to consider or implement to actively become a more diverse workplace.

This is a hard question as I don’t admire that many individuals! However, my mum was a nurse for over 40 years and that has definitely given me a massive respect for those in the medical/emergency services. The dedication and resilience they show day in day out is something that I can only aspire to.

Any reading/website you would recommend to stay updated?

I am morbidly obsessed with Brexit at the moment, so I can’t get enough of The Guardian site.

In terms of technology, I am interested in how it can be used for social good and I believe that this will undoubtedly be the focus on how technology develops.

For example, Tech Future Labs (a great source of information and events) have postgraduate courses focusing on how tech can help realise human potential, and the positive effects it will have on the individual and society as a whole. I believe we will be seeing a lot more of this thinking and hopefully this will permeate how technology is taught across all levels of education.

What is your biggest stress reliever?

Yoga, RPM and walking. I love being active and I find all of those things quieten my very overactive brain.

Don’t ever compromise yourself and your values. Stand up and make your voice heard but balance it with a good sense of self-awareness.

What job did you dream of when you were a kid — your Plan A career path?

Being an astronaut! I went to Kennedy Space Center as a young teenager and thought it was incredible. However, I developed a fear of flying in my 20s, so I don’t think it would have worked out.

I used to be a synchronised swimmer.

Angela has a long-standing background in digital and tech delivery. She has worked across the full spectrum of service and product companies, before moving into consultancy and operational roles for tech start-ups, and expanding/transforming businesses.

As an Operations and Delivery Lead, Angela has a strong focus on building/improving infrastructure, scaling a business, delivery practices, and team management.

Angela also lectures at a tertiary and industry level, and is an advocate for positive and diverse working cultures.

Looking for some more inspirational reads?

Why Detailed Job Briefs are Critical in Securing Candidates

Salt’s APAC CEO Jacqui Barratt shares her thoughts on the importance of clients providing detailed job briefs. I last wrote about this very topic back in 2015 and here I am on a Friday afternoon hitting the keyboard because the picture hasn’t changed. “This role is so critical.” “People are our greatest asset.” “It’s so…