The elephant in the room: Unconscious bias in hiring 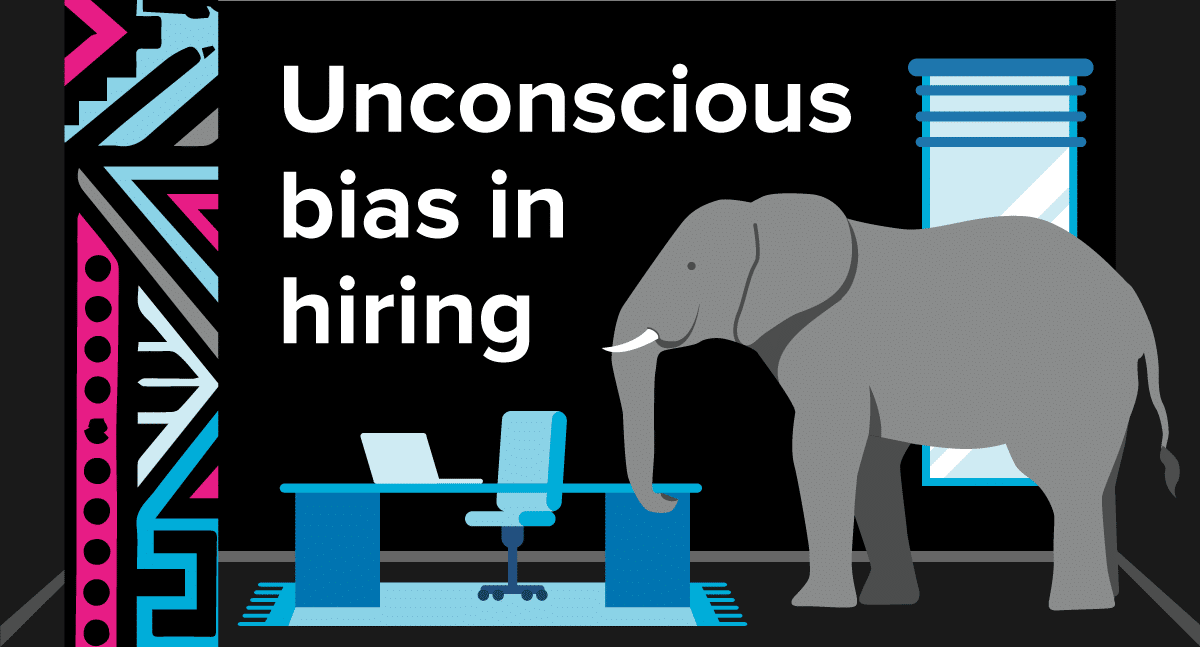 The year 2020 has reminded many of the everyday biases which still exist within our society and has had a particularly interesting effect on various industries and their corporate culture. We have seen many companies look into creating more inclusive work environments, as well as dealing with issues of discrimination surrounding gender, sexuality, and race.

Although this is a good starting point, the elephant in the room is that some organisations underestimate the possibility of unconscious biases in the hiring and screening of candidates. Here are some recent stats which confirm this:

What is unconscious bias?

Unconscious bias refers to the negative attitudes or stereotypes about a group of people that impacts an individual’s understanding, actions, and choices unconsciously. These types of unconscious biases include but are not limited to gender biases, confirmation bias (when you have an initial perception about a candidate and based off that you make use of an interview process as a way of confirming and validating these pre-existing beliefs that affect the outcome of your decision as a hiring manager), and affinity bias (when you favour one candidate over the other because you share a trait or characteristics).

Because of these forms of unconscious bias, talented people can sometimes be overlooked in the interview selection process, which dilutes the quality of talent within the hiring pool. This essentially leads to talent being evaluated based on likeable characteristics instead of skill or ability. At its core, unconscious bias does not only relate to hiring.

Everyone holds unconscious bias. This invisible yet omnipresent force impacts many of the decisions we make in our everyday lives. Unconscious biases can act as ‘tipping the scale’ when it comes to decisions about recruitment, promotions, and even incentivizing employees.

In the hiring process, unconscious bias can affect many before they even make it to their first interview. This is because the decision can sometimes be made on merely inspecting a picture on a candidate’s CV or LinkedIn profile, their name, background, education, or even something as vague as a candidate seeming like someone that you can easily hang out with outside of work.

All of these unconscious biases are irrelevant criteria for the job but could determine which candidate gets the opportunity to represent themselves. Although these biases can present themselves as unconscious, they might not always be. According to HR thought leader Matt Alder, deciding to employ a candidate that you think could be a good ‘culture fit’ or are similar to people already within your organisation happens consciously in most cases.

In some countries, it may be illegal to reject candidates based on age, race, and gender characteristics, but rejecting a candidate based on ‘culture fit’ is not. The biggest problem that hiring for culture fit presents is that organisations do not know how to measure a ‘good’ culture fit other than basing it off their own pre-existing biases.

No matter how we choose to look at it, biases in hiring stand in the way of innovative ideas and an efficient labour force that would ultimately positively contribute to the global economy.

Thankfully many companies are now looking at their workforce and trying to create more diverse and inclusive environments. However, we must continually remind ourselves that unconscious bias does and will always exist and that we need to all be aware of it and understand it, to move forward.

How do we move forward?

Getting rid of our implicit biases may seem like a mammoth task, however, it is a necessary task for the benefit of greater society but also to ensure business growth, innovation, and success.

Here are a few practical steps you can take to help level the playing field for all candidates while ensuring that you attract and retain the very best talent for your business:

Age discrimination in hiring hurts us all

Salt’s APAC CEO Jacqui Barratt shares her thoughts on the perception of age and years of experience. I felt compelled to share my thoughts on age with you after talking to many candidates at both ends of the spectrum who are being actively discriminated against. All the research tells us that diverse teams and organisations…

What motorsports can teach us about mindfulness

Recently we announced that we will be supporting McKenzy Cresswell as he launches his F4 career at the age of 15. When learning to be a driver, there is a lot of preparation that goes into it. You need to make sure that your mind is trained, and mindfulness is a technique that is used…

Top tips on how to kickstart your eCommerce career in 2021

In today’s world, we have seen many rapid changes, one of which is the fast and continuous growth of eCommerce. If you are looking at getting into eCommerce, now might be the perfect time to get started within this market.   What is eCommerce?  Simply put, eCommerce is a business model that allows businesses and individuals…